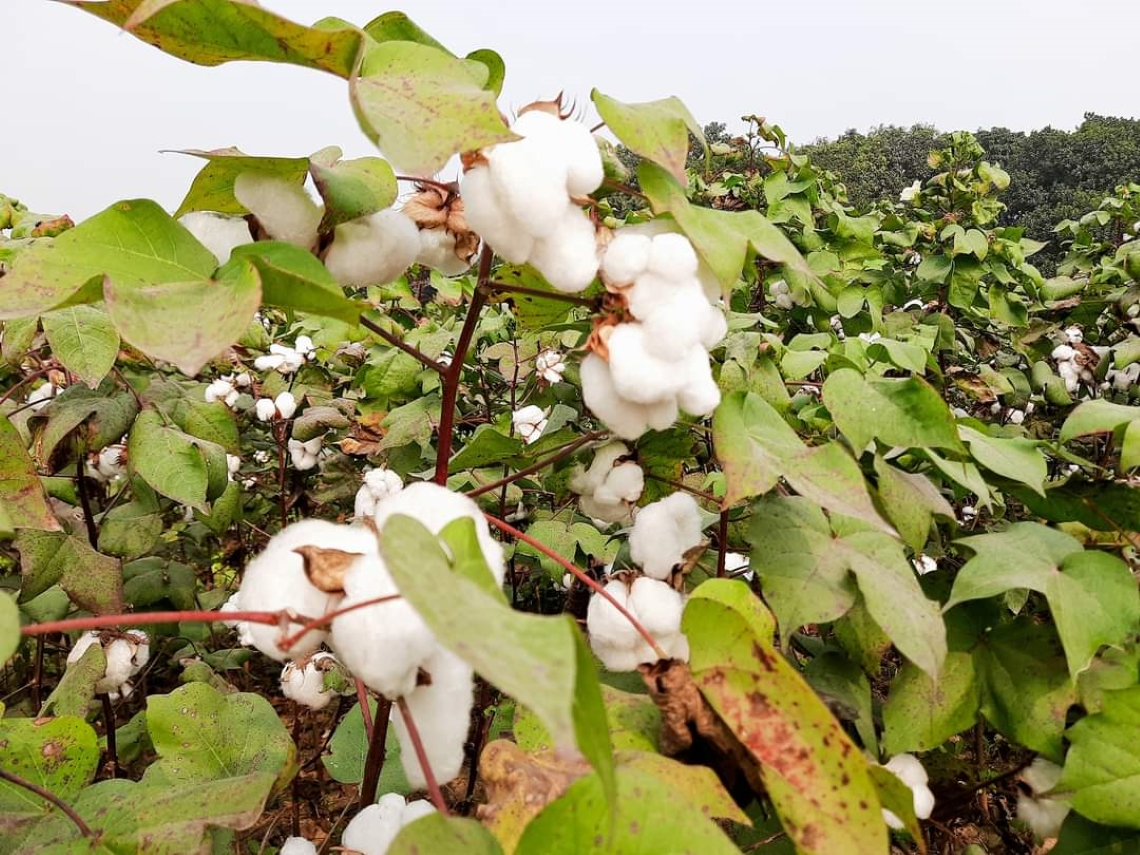 Cotton is the oldest known and most used textile around the world. While it took around 3,000 years to understand how to cultivate and process the first wild cotton, now with nuclear techniques, new and improved varieties have been developed in Bangladesh in record time: just five years.

Cotton is one of Bangladesh’s most important cash crops. Known for the healthy and organic cotton fabric ‘muslin’, the textile industry directly employs over four million people — 80 per cent of them women — and provides the livelihoods of millions of farmers. Densely populated, Bangladesh’s average land size is less than one hectare per farmer, leading to very intense cultivation. To make ends meet on such small plots, farmers would need three harvests a year, but this had not been possible with traditional varieties as they take too long to grow. New varieties developed using nuclear techniques are changing that (see Irradiating plant material).

“Mutation breeding is a new area of research for us and we now have this new cotton variant, which can be grown in a short period of time. We expect this fast pace growth will increase yields and farmers’ income by 40 per cent,” said Kamrul Islam, Senior Scientific Officer and Project Director at Bangladesh’s Ministry of Agriculture’s Cotton Development Board. Islam and his team have been collaborating with the IAEA and the Food and Agriculture Organization of the United Nations (FAO) to develop new varieties of cotton that are more productive and have better fibre quality. 13 March 2021 marked the official release and registration of a new cotton variety, called CDB Tula 1, which – thanks to concerted efforts – was developed in a third of the time that it usually takes to develop new varieties using traditional methods, and half the time it usually takes when using nuclear techniques. Now the new cotton variety is being planted at 13 different locations in Bangladesh and over 1000 farmers are receiving training on the planting procedure.

Once widely used, the new variety is expected to bring macroeconomic benefits to the country as well. Due to lack of sufficient, high quality domestic supply, the cotton industry is currently dependent on imports. The alteration of the dry season and the monsoon season makes Bangladesh’s cotton particularly vulnerable, and the lack of a stable water supply year-round has caused huge losses in yields. This will be exacerbated by climate change. Hence, developing varieties that are tolerant to climate extremes and that grow at a quicker pace has been important for the country, Islam explained.

Irradiating cotton seeds with gamma rays to induce more variation, followed by selection for performance allowed for the development of the CDB Tula 1 variety, which is high yielding, drought tolerant and resistant to diseases while delivering a third crop per year thanks to its shorter maturity and its lack of sensitivity to the length of daylight.

Mutation breeding is cost effective and quicker than conventional breeding as it helps create numerous new genetic variations for a wider selection. By starting with so-called elite varieties for inducing genetic variation, the time to introduce additional farmer-preferred traits and develop new varieties is significantly reduced.

“Nuclear technology is helping scientists unmask the hidden potential in plants, allowing plant breeders to develop crop varieties with improved traits,” said Ljupcho Jankuloski, Plant Breeder and Geneticist at the Joint FAO/IAEA Centre and the technical officer for the project. “By using radiation and related technologies to rapidly breed improved varieties, productivity can be accelerated.”

Bangladesh also benefitted from networking with scientists from other countries across Asia, working on similar programmes. “Exchanging experience on breeding methods specific to cotton also played a role in the success of Bangladeshi scientists,” said Massoud Malek the IAEA Programme Management Officer facilitating this regional cooperation. “Such regional cooperation strengthens the efforts to address a crop such as cotton with common regional importance.”

Bangladesh Cotton Development Board scientists visit the mutant variety to observe the maturity of the crop and its performance. (Photo: K. Islam)

Through yearly training programmes arranged by the Board, farmers can directly see the superior qualities of the new crops. In classrooms, the cotton farmers learn about the different stages in the life cycle of the cotton plant. Then they are shown ongoing field trials at the research centre which uses irradiation to develop superior seedlings at a fast pace. This will allow farmers to understand the process, share their knowledge in their community and begin growing high-yield cotton independently.

Plant breeding is the process of exposing plant seeds, cuttings or other planting material to radiation, such as X-rays or gamma rays. Induced irradiation causes changes in the DNA, mimicking the natural process of spontaneous mutations and creates genetic diversity/variation in the cotton population. The individual plants are then multiplied and examined for their traits. Those exhibiting the desired traits continue to be cultivated and multiplied so they can be distributed to farmers around the country.