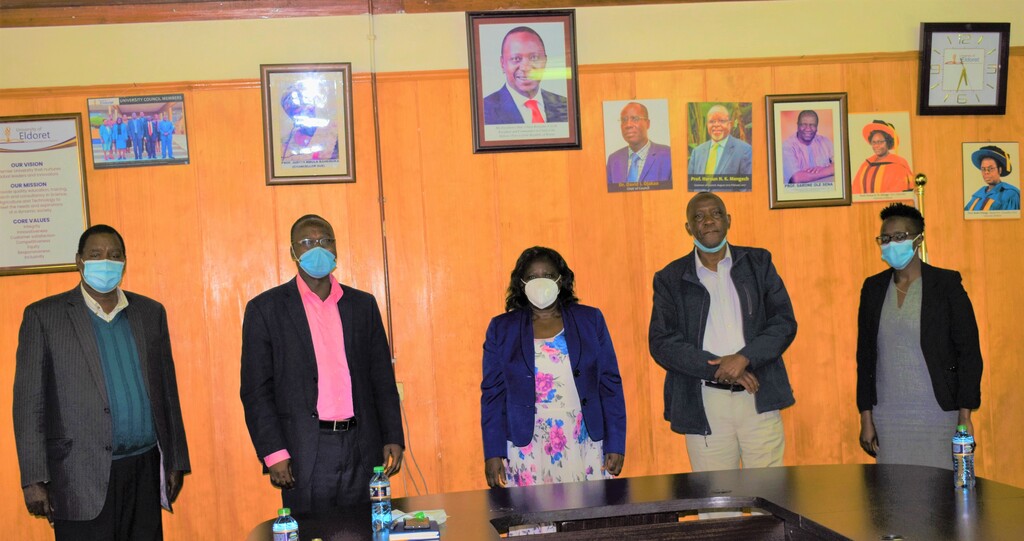 The Director General of the National Commission for Science, Technology and Innovation (NACOSTI) Prof. Walter Oyawa paid a courtesy call to the University on 29th September 2020, where he was received by the University Vice-Chancellor Prof. Teresa Akenga. The purpose of the visit was to deliberate on possible areas of collaboration and synergizing between the two institutions.

The areas of discussion were as follows;

Her sentiments were echoed by the University’s Director of Research Prof. Vincent Sudoi who acknowledged that apart from the Research Policy, the University has two other policies namely the IP and Consultancy Policy, which has been instrumental in enhancing the level of research conducted in the University. Prof. Sudoi also noted that the code of Conduct and Ethics in Research Policy is at an advanced stage of development and will soon be finalized. He finalized by highlighting that the Code of Conduct Policy (IERC SOPs) is currently being developed for purpose of accreditation by NACOSTI.

The Deputy General of NACOSTI Prof. Walter Oyawa applauded the efforts enhanced by the University in meeting the guidelines set in place by NACOSTI. He assured that his institution will work in liaison with the University in order to steer ahead research and innovation in the country.

As an institution NACOSTI is mandated to collect data from Research Institutions (both public and private) and Universities annually so as to submit a report to the Cabinet secretary, Ministry of Education. It is also mandated to register and accredit Research Institutions and approves all scientific research in Kenya. It accredits Institutional Ethics Review Committees (IERCs) and assures quality research among institutions. It also develops and enforces codes, guidelines and regulations in order to maintain and manage standards and quality of the research systems among other roles.