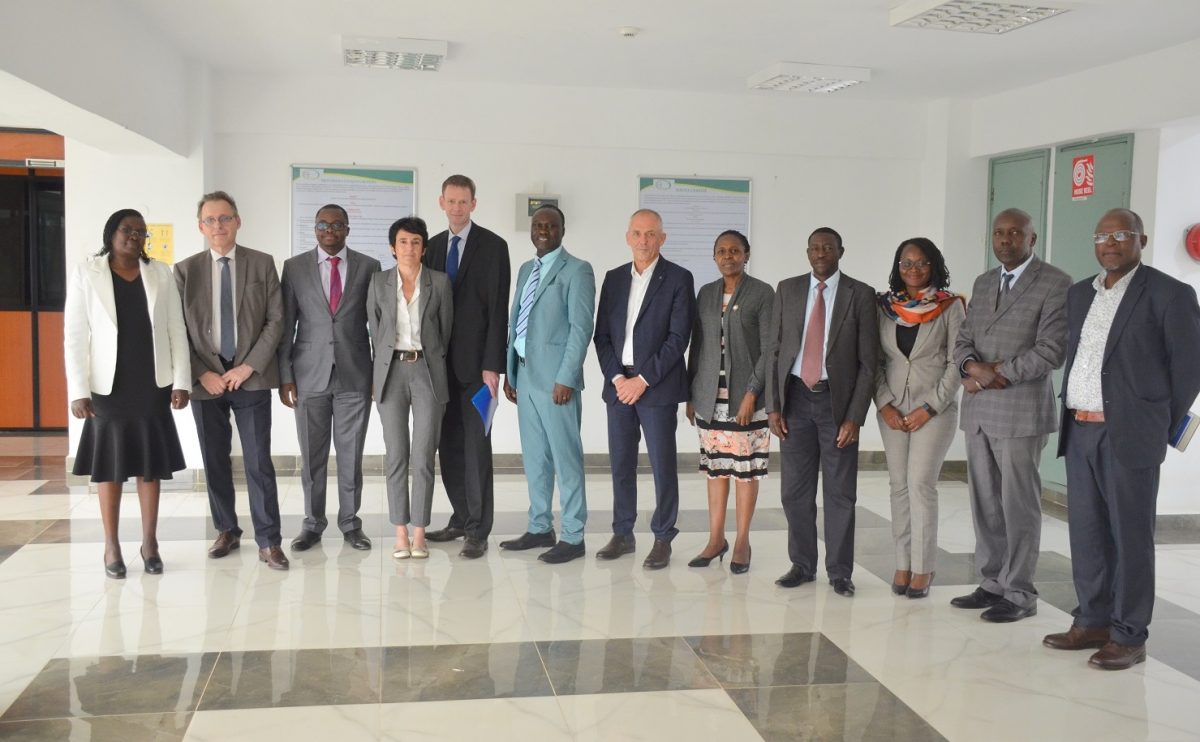 The French National Centre for Scientific Research (CNRS) representatives led by the President and CEO Prof Antoine Petit and the Attaché for Science and Higher Education at the Embassy of France in Kenya Dr. Mathieu Guérin paid a courtesy call to the Director General, the National Commission for Science Technology and Innovation (NACOSTI), Prof. Walter Oyawa on 22/06/2022 at the headquarters of the commission. The consultative meeting was also graced by Chairpersons of NACOSTI Board Committees Ms. Rachel Shibalira and Prof. Raphael Munavu, the CEO of the National Research Fund Dr. Jemimah Onsare, a representative from the Ministry of Interior, and senior staff of the Commission. The meeting’s purpose was to deliberate on possible ways and mechanisms of collaboration between the French National Centre for Scientific Research and the National Commission for Science Technology and Innovation. Most importantly, the consultative meeting sought to enhance cooperation with Africa in the field of scientific research and understand the strategy and policy of Kenya on scientific research for future cooperation.

The French National Centre for Scientific Research is the French state research organization and the largest fundamental science agency in Europe. In 2016, it employed 31,637 staff, including 11,137 tenured researchers, 13,415 engineers and technical staff, and 7,085 contractual workers. The CNRS was ranked No. 3 in 2015 and No. 4 in 2017 by the Nature Index, which measures the largest contributors to papers published in 82 leading journals. In May 2021, the CNRS was ranked No. 2 in the Nature Index, before the Max Planck Society and Harvard University.

The discussions were spearheaded by Ms. Rachel Shibalira who explained the role of NACOSTI as the agency mandated to regulate and assure quality in the science, technology and innovation sector in Kenya, and advise the government in matters related thereto. She emphasized on collaboration across all the relevant fields that support the realization of Kenya’s Vision 2030 and in tune with National science and technology priorities. On his part, Prof Munavu pointed out the importance STEM education, Science Museum, indigenous technologies, and possible ways on how to foster basic sciences through events such as Science Olympiads. The CEO of National Research Fund who is also a Board member of NACOSTI, Dr. Jemimah informed the meeting of previous collaborations with institutions in France and looked forward to intensified partnerships of mutual benefit.

Prior to inviting the head of the French delegation to give his remarks, the Director General of the Commission, Prof. Walter Oyawa, thanked the delegation for their desire to collaborate with NACOSTI. He reiterated NACOSTI’s regulatory, coordination, and advisory mandate of the science, technology and innovation sector. He informed the meeting of possible areas of collaboration and partnerships that included: joint research, technology development and innovation projects that are focused on national priorities; joint resource mobilization for research, science, technology, and innovation activities; exchange of individual scientists for the purpose of conducting academic research work, organize and participate in joint academic, scientific and technological events such as conferences and exhibitions; exchange of information on the management of techno-parks; Research Chair Programmes; Research Centres of Excellence; Joint Laboratories and participation in European Union Framework Programs (EUFPs) for research, development, and innovation; joint harnessing of science and technology for maximum exploitation of the Blue Economy.

The head of French Delegation Prof Antoine Petit informed the meeting of the scale of investment of the French government and CNRS on science, technology and innovation. He stated that CNRS has 1000 Labs out of which 100 Labs are outside France of which two (2) are in Africa (in Senegal & South Africa). He expressed the delegations desire to partner with NACOSTI in the furtherance of science and technology for mutual benefit, and confirmed that the areas of collaboration proposed by NACCOSTI were very similar to CNRS priorities, hence making it easier to initiate joint activities. He was in full support of initiation and facilitation of staff and student exchange programmes between both countries as part of capacity building.

On the way forward, there was agreement to commence work with and review the already established MoU with the Ministry of Education. Dr. Mathieu Guérin, the Attaché for Science and Higher Education at the Embassy of France in Kenya offered to circulate existing MoUs or protocols for further consideration. The French delegation agreed to host the Kenyan delegation in France at an opportune moment.