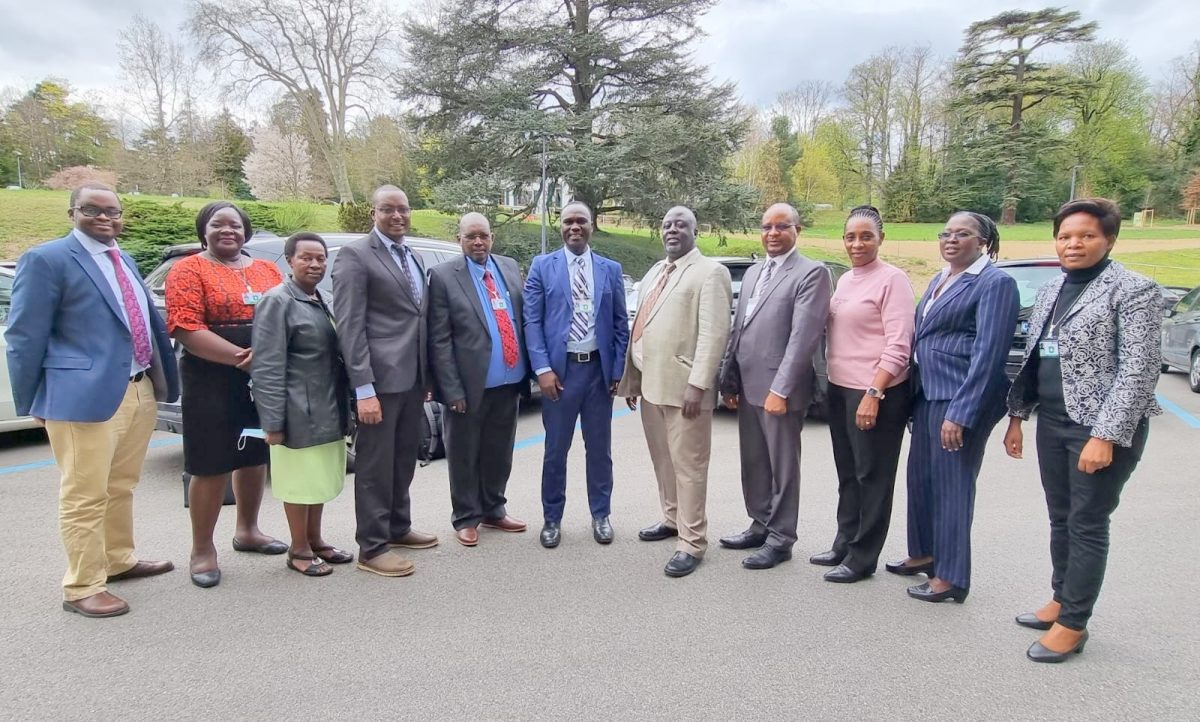 Kenya’s Delegation during the Preparatory Committee Meeting for the Ninth Review Conference in April 2022 in Geneva, Switzerland.

The preparatory committee meeting for the Ninth Review Conference of the Biological and Toxins Weapons Convention (BWC) was held from 4th to 11th April 2022, in Geneva, Switzerland. Kenya was represented by H.E Amb. Cleopa Mailu (Head of Permanent mission), as the head of the delegation, Prof. Walter Oyawa (Director General, NACOSTI, and BWC National Focal Point), CEO’s from several research institutions and several Government officers

Amb. Dr. Cleopa Mailu welcomed the Kenya delegation, noting that the previous Kenyan delegation at the Meeting of State Parties had a significant positive impact on the entire BWC community. He expressed that matters of BWC have moved a notch higher in Kenya owing to the large and keen Kenyan delegation. He looked forward to impacting outcomes from the current Kenyan delegation, which was equally large and capable. He requested the Delegation to make maximum use of bilateral engagements on the sidelines of the meeting, and to get as much information as possible, as well as seek mutually beneficial partnerships. He confirm that his office will support the Delegation and the National Focal Point and would make every effort to avail opportunities and facilitate partnerships and collaborations

On his part, the National Focal Point and Alternate Head of Delegation Prof. Walter Oyawa thanked H.E. Amb. Dr. Cleopa Mailu for the warm welcome, and continued support for the Kenya Delegation. He thanked the mission for facilitating successful several bilateral meetings on the sidelines of the last Meeting of States Parties held in November 2022. These included meetings with Delegations from the US, UK, Canada, EU, among others. Prof. Oyawa re-affirmed the commitment of the Delegation to represent Kenya effectively and firmly. He observed that a key pending issue is the finalization of Kenya’s Biosecurity Strategy and its accompanying legislative and administrative instruments. The Kenya Delegation will come up with a clear Roadmap on how to achieve the completion of the Biosecurity Strategy. Other members of the Delegation provided background information and insights on the status of developing and implementing the Biosecurity Strategy

PARTICIPATION DURING THE CONVENTION

Kenya confirmed that substantive progress to the additional understandings and Agreements reached by previous conferences and in meetings of states parties during the intersessional Programmes held from 2017 to 2020 in relation to various articles of the convention had been realized. Through the established competent designated National Focal Point (NACOSTI), Kenya has continued with the national implementation measures, as appropriate, and in accordance with her 2010 constitution.  Such measures include:

Agenda Item 7: Comprehensive consideration of all provisions of the Convention

The highlights under this agenda item included Kenyan Statements on comprehensive consideration of Article IV- National Implementation of the convention, Article VII- Assistance, Response and Preparedness, Article X- International Cooperation and Article XII- Cross-cutting issues. Since Article IV requires States Parties to take any national measures necessary to prohibit and prevent the development, production, stockpiling, acquisition or retention of biological weapons within a State’s territory, under its jurisdiction, or under its control, Kenya encouraged Member States to consider the need for enhanced vigilance and interaction among member states through diagnostic and prophylactic measures that involve peer-based monitoring and assessment of the status of BWC implementation in member states, as well as cross-border collaboration moving forward from the outbreak of COVID-19. Such approach will proactively avert or mitigate against the potential catastrophic effects of emerging Biological Weapons and the next generation bioweapons to security, national cohesion, peace, prosperity, and the general well-being of citizenry. The ongoing advocacy by different States Parties for a Science and Technology Review mechanisms is welcome. As we agree on the mode and structure of participation, Kenya emphasizes that its establishment now is very crucial in managing the potential Biorisks of the new and emerging technologies. Further, investments in Research and Technology Development as pertains to the convention will also require consideration of ethical issues, hence the need for continuous education and training of persons involved. Kenya encouraged States Parties to establish National Scientific and Ethics Review Committees acknowledged the Proposal for the establishment of a Scientific Advisory Committee.

SIDE EVENTS AT THE MARGINS OF THE PREPARATORY COMMITTEE MEETING

a) Bilateral Meetings with the delegates

The Kenyan delegation was able to organize and participate in side-events meetings. Bilateral side meetings were as a follow-up of the previous discussions during Meetings of the States Parties in November 2021 with the BWC Implementation Support Unit (ISU) and delegations from US, Canada, VERTIC and UNICRI. The Bilateral meetings resulted in joint pronouncements covering the need for:

Kenya’s BWC National Focal Point was requested to be part of Global Partnership’s Signature Initiative and will participate in each of the sub-working groups to develop the modalities of the project implementation.

The partners of the Global Partnership Signature Initiative emphasized their commitment to support the Kenyan government in the development of the broader Biosecurity Strategy and the completion of the Biosecurity Bill, especially in stakeholder engagement and awareness process. The Director General NACOSTI/BWC National Focal Point has been invited to Wilton Park Conference on Biosecurity in the UK as from 20th to 22nd April 2022 where commitments will be translated into Actions. It is a high-level closed-door conference whose focus will be laying modalities for the signature initiative project in Africa.  This is an impressive indication of how the global initiative project has considered Kenya as a key stakeholder within Africa in the Institutional framework for BWC Implementation and Biosecurity. Capacity building issues on biosecurity and biosafety through bilateral agreements with the government and implementation institutions and agencies was also discussed.  ISU requested Kenya to host the first Universalization workshop under the new project before the ninth Review conference of BWC that will take place at the end of the year. Kenya will work closely with ISU in the preparation and in determination of the outputs of the workshop. To keep the interest of the youths alive in Biosecurity matters, a virtual conference for the youths will be held before the Ninth Review Conference.

b). Universalization and Effective Implementation of BWC

Kenya participated in Preparatory Committee for the Ninth Review Conference and had productive bilateral engagement during the side events at the margins of the PrepCom. The Kenyan delegates, met with the BWC Implementation Support Unit (ISU) and delegations from US, Canada, VERTIC and UNICRI. Highlights of the convention included Kenya’s Statement on General Exchange of Views which captured the substantive progress to the additional understandings and Agreements reached by previous conferences and in meetings of states parties during the intersessional Programmes held from 2017 to 2020 in relation to various articles of the convention.   Kenya emphasized on the challenges she is facing currently which included:

The National Focal point is now preparing for the upcoming Ninth Review Conference that would take place in Geneva in-person format in accordance with the regular practice under the BWC from 28th November to 16th December 2022, subject to the availability of funds.  For publicity, the Preparatory Committee requested the Secretariat to issue press releases for the meetings of the Review Conference.

Kenya is a member of Biological and Toxins Weapons Convention (BWC) since 7th January 1976 and has attended 2 review conferences since -The Seventh and Eighth Review Conferences in 2011 and 2016 respectively.