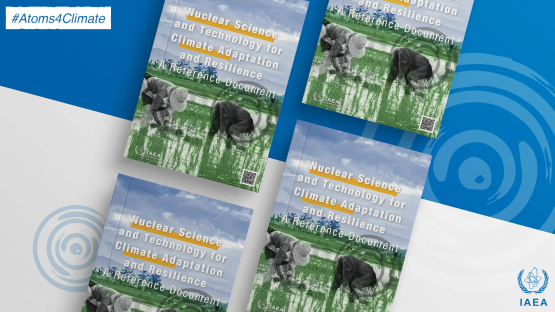 In the run up to the 26th United Nations Climate Change Conference, COP26, the International Atomic Energy Agency (IAEA) has published a comprehensive report setting out how nuclear techniques can help the world adapt to a changing climate and become more resilient to extreme weather events.

“The world is facing a climate emergency that is threatening people’s lives and livelihoods,” said IAEA Director General Rafael Mariano Grossi, who will attend COP26 in Glasgow to highlight the role of nuclear energy and technology in mitigating and adapting to climate change. “Nuclear techniques offer a tangible way to respond to this challenge, such as breeding sturdier crops, protecting scarce water resources and much more – now and in the future.”

At COP26 in November, world leaders will review their 2015 commitment from Paris to limit the temperature increase to well below 2°C and aim for 1.5°C above pre-industrial levels. According to COP26 Explained, the world is currently not on track to meet this goal, and more catastrophic flooding, bush fires, extreme weather and destruction of species are expected to occur by 2100.

The IAEA will be participating actively in COP26 to draw attention to the role of nuclear energy in climate change mitigation and raise awareness of how nuclear science and technology already significantly support efforts in climate change adaptation and monitoring. The IAEA will on 15 October issue a separate report on the importance of nuclear power – a low carbon energy source – in the clean energy transition to achieve a net zero world.

“We need to translate words into actions, and we should do that by using every available scientific tool, including nuclear technology,” said Grossi. “The IAEA is a tested partner on climate action and will contribute to the discussions at COP26 in Glasgow on how to accelerate solutions. We hope this document serves as a valuable reference for our potential partners.”

During the period 2012–2020, the IAEA helped 102 countries and territories to adapt to the impacts of climate change through 481 targeted technical cooperation projects, with total disbursements of approximately €112 million.

Over 70% of the IAEA’s climate adaptation related projects focus on climate smart agricultural practices and optimizing livestock and crop production. This includes the development through mutation breeding of new improved crop varieties of, for example, tomatoes and soybeans that can thrive under changing environmental conditions, perform better in harsh environments, or resist new pathogens. Nuclear techniques can be used to suppress insect pests such as fruit flies or mosquitos to fight Zika, dengue and other diseases, as well as to monitor soil erosion caused by, for instance, heavy rainfall.

As explained in the new document, the IAEA also supports understanding of the availability and movements of water affected by climate change. Such information could, for example, reveal that heavy rains originate from evaporated ocean water or estimate the age and location of valuable groundwater resources hidden from the human eye. The document also addresses other topics such as how nuclear techniques tackle sea level rise and ocean acidification.