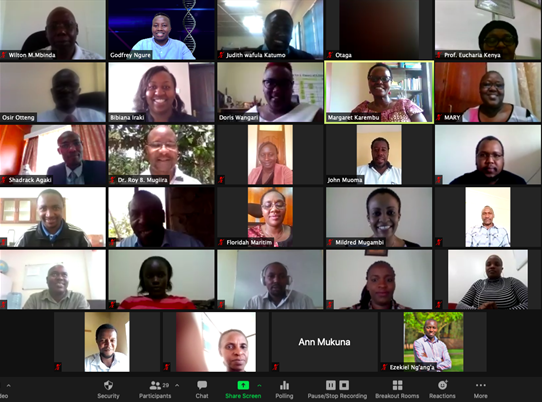 The Open Forum on Agricultural Biotechnology in Africa (OFAB) Kenya chapter hosted a virtual Agri-biotechnology sensitization and updates meeting on Friday 24th July 2020. The aim of this meeting was to provide updates on agricultural biotechnology research and developments in Kenya and introduce and invite key stakeholders to a new OFAB Kenya Associates Program. The meeting brought together 27 participants including scientists, farmer leaders, faith-based leaders, women and youth representatives, select private sector players and social media influencers to deliberate on the progress Kenya is making in harnessing the potential of biotechnology applications in agriculture.

OFAB is a platform jointly run by National Commission for Science, Technology and Innovation (NACOSTI) and International Service for the Acquisition of Agri-Biotech Applications (ISAAA). OFAB Kenya brings together stakeholders in the agricultural biotechnology sector to share knowledge and experiences on the technology. The chapter advocates for responsible and safe use of agricultural biotechnology in Kenya. To achieve this, it is anchored on three fundamental principles; to engage, share and network.

The new OFAB Kenya Associates Program seeks to expand and diversify OFAB Kenya’s goal of building public understanding on agricultural biotechnology and the opportunities it presents in improving food security and socio-economic development. Members of the Program will play a crucial role in cascading factual information about agricultural biotechnology in the country as the country continue to explore various appropriate technologies to improve food productivity. During the meeting, participants were sensitized on the role of biotechnology in improving agricultural production (by developing disease/pest resistant and climate resilient crops), with a cascade effect on value addition and prevention of post-harvest losses.

In the Government’s Big Four Action Plan, agriculture is identified as a key contributor to achieving food and nutrition security, as well as an enabler in driving non-agricultural economy including manufacturing, providing inputs and markets for non-agricultural operations such as building/construction and other services. Contributing to over 30 per cent of the Gross Domestic Product (GDP) and another 27 per cent of GDP indirectly through linkages with other sectors, agriculture is one of the most important drivers of the country’s economy. Additionally, the sector employs over 40 per cent of the total population, and more than 70 per cent of the country’s rural population.

In the past few decades, performance of Kenya’s agriculture sector has been impaired by numerous challenges, with serious implications on the country’s economy and food security. Key among these include the erratic and unpredictable weather patterns resulting from climate change, sporadic drought and emergence of new more virulent insect pests and plant pathogens. The combinatory effect of these factors, coupled with lack of timely interventions (or non-adoption, thereof) is an agriculture sector that is out of sync with the need to feed Kenya’s growing population.