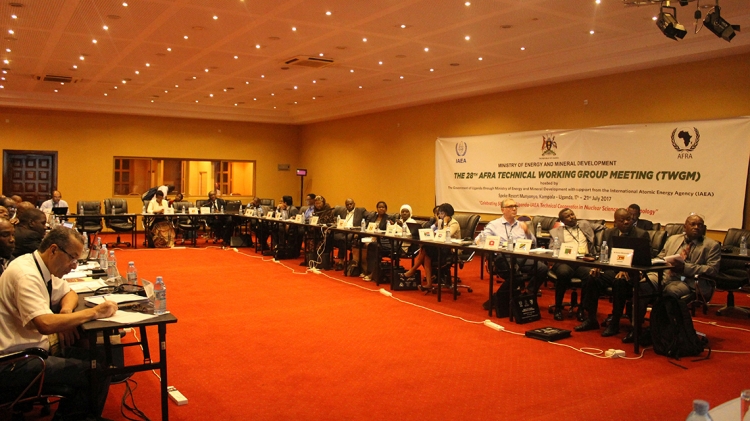 The African Regional Cooperative Agreement for Research, Development and Training Related to Nuclear Science and Technology (AFRA), with support from the International Atomic Energy Agency (IAEA), will hold its 31st Technical Working Group Meeting (TWGM) in Conakry, Benin from 20th to 24th July.

The meeting will provide the opportunity for AFRA States-Parties to discuss and finalize the agenda of the AFRA High-Level Policy Meeting and schedule a ministerial conference to upraise AFRA in view of last appraisal having happened in 2008.

Also present in the meeting was Dr. David Otwoma, the Chief Analyst in Physical, Industry and Energy Sciences Schedule (NACOSTI), Mr. Stephen Situma, the Senior Analyst in (NACOSTI) and Mr. Felix O. Wanjala the Project Management Officer assisting the AFRA Focal Point who explained the backstopping role of the IAEA in handling AFRA matters. Mr. Wanjala explained the need for AFRA NC to spearhead adherence to meeting obligations to AFRA principal among them being the annual payment to AFRA Fund and ensuring Kenya participates in AFRA Projects effectively and efficiently for maximum impact on daily lives of citizens.

The meeting agreed to: –

The meeting also created an ad hoc committee spearheaded by Stephen Situma to reach out to important stakeholders in Nuclear Power and Energy Agency, Nuclear Regulatory Authority and Academia, among others, to interrogate the draft MoU between AFRA and AFCONE, shared by IAEA and AFRA before advising the AFRA NC to submit it to AFRA for onward transmission to IAEA after the 31st TWGM. NACOSTI will continue to support the efforts towards the success of the meeting.